Listen to this story and hear how Jesus triumphed over Satan.

Jesus said to him, “Away from me, Satan! For it is written: ‘Worship the Lord your God, and serve him only.’” 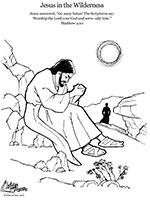 Narrator: Jesus came to earth to show people how the kingdom of God would come to this world. After Jesus was baptized, the Holy Spirit led Him into the desert, so that the devil could test him. After Jesus had gone without eating for forty days and nights, he was very hungry. Then the devil came to him again, to tempt him.

Satan: If you are God's Son, tell these stones to turn into bread.

Jesus: The Scriptures say, ‘No one can live only on food. People need every word that God has spoken.'

Narrator: By turning the stones into bread, Jesus would have been popular with the people, giving the people everything they wanted.
The devil was trying to make Jesus do things on His own, rather than waiting for God to give Him direction. But Jesus knew that what mattered most was that He obeyed God. Then the devil took him to Jerusalem and had him stand on the highest point of the temple.

Satan:(speaking over the wind) If you are God's Son, jump off. The Scriptures say: ‘God will give his angels orders about you. They will catch you in their arms, and you won't hurt your feet on the stones.'

Jesus: (speaking over the wind) The Scriptures also say, ‘Don't try to test the Lord your God!'

Narrator: By throwing himself from the temple, Jesus would have been a wonder-worker, with all of Jerusalem amazed at his power. He would have been doing it just to prove that God would catch him. And again, Jesus cared more about being obedient to God, and doing what God asked Him to do. Finally, the devil took Jesus up on a very high mountain and showed him all the kingdoms on earth and their power.

Satan: I will give all this to you, if you will bow down and worship me.

Jesus: Go away, Satan! The Scriptures say: ‘Worship the Lord your God and serve only him.'

Narrator: Then the devil left Jesus, and angels came to help him. Jesus was exhausted and he was hungry, but he had won the battle and hadn't given in to the devil's temptation. He was ready to begin his mission given to him by the Father.

If you would like to read more about Jesus and his ministry, check out the gospels of Matthew, Mark, Luke and John. They're the first books in your Bible's New Testament.

This bookmark will be a handy reminder of God’s rules for living godly lives.

Countdown to Christmas and prepare your hearts for the greatest gift of all, Jesus Christ. Included are 24 dated ornaments and 5 family devotionals.

Here are suggestions of how families can create faith-formative activities that help children learn what a Christian can be.

Download this picture frame craft and hang it up in your home as reminder that we are created in God's image!

Can you solve these nine Kids Corner Bible word searches?

Reach the world with the Word that God has spoken!

Ever been on a road trip? Travel Route 32. It's the road that leads to Christ.

Another great list of fun and faith-forming activities for the summer days ahead!

While at home, a great list of fun and faith-forming activities!

From Fuzzy Focus: What we do and who we are reflect God to all around us. Check out Who We Are, a song about being created in God's image.

Listen to this story and hear how Jesus triumphed over Satan.

The Tower of Babel

Listen to this story from the Old Testament, where people thought that they no longer needed to obey God.

A Cry for Help

Liz gets an email from Ireland asking for help in setting up an internet radio station. How can Liz help a place so far away?

Lucille and Liz compete in a game show called “Gut Check.” Are they both willing to win at all costs?

All the News That's Fit to Print

When Connor Gecko, Granny’s grandfather, is honored at a special town celebration, anonymous notes to the Terrene Gazette cast suspicion on the war hero's stories.

Chamy chooses to study Liz to discover how to live the Christian life. Can Liz show Chamy how to live out the Bible in all he does?

Lucille's article deadline is quickly approaching! What can she possibly write for next edition of the Terrene Gazette?

Liz and his friends are very excited about competing in the Beat the Buzzer game … so excited that they don't complete their assignment for church school, figuring out the difference between grace, mercy, and justice.

The curtain opens at the Clubhouse theater with two new plays about being happy and content. How do you find happiness?

It's time for Clubhouse Theater as Liz and his friends present a play about Paul, Silas, and the Philippian jailer.

When Liz's cousin Herbert comes back home for a visit, he and Lucille are challenged to be better witnesses to their friends. But why is it easier to witness to a stranger than to their friends?

Liz is so desperate to get money for his dog. What bad decision does he make this time to get the cash he needs?

Scooter is Terrene’s best speller. But he’s got one BIG problem: the big stage and the bright lights terrify him. Can he overcome his fear and take the spelling crown?

In church, Liz discovers Kayla Leon, a fantastic new singer, and he decides to become her manager. Can Liz show her how to be a Christian performer or is Kayla now Terrene’s new diva?

Who’s planning the biggest prank in Reptarium Middle School History? The new kid Kenan Leon seems to have all the answers, but does he know right from wrong? How far can this prank go before someone has to speak up?

Heroes Part 1: A Hero in the Making

Liz decides he’s going to become a hero, but he just can’t figure out how.

What scares you the most? What do you do when you’re afraid? See how Liz and the gang deal with their greatest fears.

A very tired Liz is learning about "The Seven Deadly Sins". What happens when he meets them face to face?

Liz, Spike and Cole have a new movie obsession, “The Masked Chameleon.” Cole offers Liz a great opportunity to meet the star, but Liz already made a promise to Grandpa. Tough Decision time.

Liz must figure out what’s more important, being on camera with a hero or helping teach who our real hero is.

Lucille starts her program for broadcast on WLZR, but a caller makes Lucille wonder if her program was really a good idea.

Lucille is running for student body president against a sneaky candidate. Will Lucille use the same tactics against her opponent?

Liz, Lucille, and Scooter all try to be perfect—and they all fail. Scooter now thinks that God might just give up on him. Is Scooter right?

On this extraordinary day, Liz experiences one disappointment after another. So how does it become the best day ever?

Liz has a plan to get a good grade without doing any work. And Lucille avoids an opportunity to tell Chamy about her faith.

All of Terrene is clicking away and making duck faces, trying to capture the best selfie! Liz is confident that he’ll win the contest, until a long-forgotten figure from his past returns! Say cheese!

Cole’s got shopping bags full of presents that he says are all for him! But why is Cole hiding his list and why is he sneaking around town all night? It’s up to the Lizarado Detective Agency to solve this Christmas mystery!

Why are Liz and Spike not friends any more? Why is Lucille so miserable? Who's behind all this?

With the help of Lucille and Liz, Kayla meets her favorite celebrity idol, Rayleen. Will this chance of a lifetime lead to super stardom for Kayla?

Liz a wedding planner? Lucille a bridesmaid? Can Liz and Lucille get the gang working together in time to give Olivia and Roger a special wedding gift?

What happens when Liz mixes his bad mood with a tongue that just won't quit talking? Trouble.

Grandpa tells a story from his Anole family childhood. What secrets are revealed?

Liz has more than he can handle when usually level-headed Lucille starts buying up videos, books, and tickets to the latest Zap McDoogle motivational speech. Is this all a scam? Can Liz save his friend by showing her God’s Word?