Do you ever wonder where everything came from? The Bible says that God created the world.

In the beginning God created the heavens and the earth. 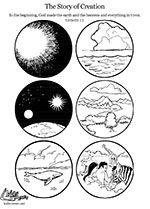 Voice 1: Look around you. Look at the sky, the clouds, the animals and plants, the water, even the people. Do you ever wonder where it all came from?

Voice 2: Many people wonder how the world began. The Bible says that God created the world. The story of Creation is found at the beginning of the Bible, in the book of Genesis.

Voice 1: In the beginning, God made the earth and the heavens and everything in them.

Voice 2: At first, the earth didn’t even have a shape. Nothing lived on it. Deep water covered it. There was no light—there was only darkness.

Voice 1: But in that darkness, there was God. God was there before the earth was created. He made everything.

Voice 2: On the first day of Creation, God said:

Voice 2: And light started shining. God looked at the light and saw that it was good. He separated light from darkness and named the light “Day” and the darkness “Night.”

Voice 3:  “I command a dome to separate the water above it from the water below it.”

Voice 1:  And that’s what happened. God made the dome and named it “Sky.”

Voice 3:  “I command the water under the sky to come together in one place, so there will be dry ground.”

Voice 2: And that’s what happened. God named the dry ground “Land,” and he named the water “Ocean.” God looked at what he had done and saw that it was good.

Voice 1: But the land was empty. God said:

Voice 3: “I command the earth to produce all kinds of plants, including fruit trees and grain.

Voice 1: And that’s what happened. The earth produced all kinds of vegetation. God looked at what he had done, and it was good.

Voice 3: “I command lights to appear in the sky and to separate day from night and to show the time for seasons, special days, and years. I command them to shine on the earth.”

Voice 2:  God made two powerful lights, the brighter one to rule the day and the other to rule the night. He also made the stars. Then God put these lights in the sky to shine on the earth.

Voice 1: But there were no living creatures. So on the fifth day, God said:

Voice 3:  “I command the ocean to be full of living creatures, and I command birds to fly above the earth.”

Voice 1:  So God made the giant sea monsters and all the living creatures that swim in the ocean. He also made every kind of bird. God looked at what he had done, and it was good.

Voice 1: But the land was still empty. So God said:

Voice 3: “I command the earth to give life to all kinds of tame animals, wild animals, and reptiles.”

Voice 1:  And that’s what happened. God made every one of them. Then he looked at what he had done, and it was good.

Voice 2:  But God wanted someone to rule over the land, so he decided to make people. He said:

Voice 3:  “Now we will make humans, and they will be like us. We will let them rule the fish, the birds, and all other living creatures.”

Voice 2:  So God created Adam, and God created Eve. He created humans to be like himself. He blessed them and said,

Voice 3:  “Have a lot of children! Fill the earth with people and bring it under your control. Rule over the fish in the ocean, the birds in the sky, and every animal on the earth.”

Voice 1: Finally, God looked at everything he had made.

Voice 2: He looked at the water, the sky and the land.

Voice 1: He looked at the sun, the moon and the stars.

Voice 2: He looked at the plants, the birds and the fish.

Voice 1: He looked at all the animals on the ground.

Voice 2: God looked at everything he had made and saw that it was good.

Voice 1: And he looked at the people. And he saw that they were VERY good.

Voice 2: After God looked at everything he had made, he rested. His creation work was finished.

Voice 1: If you would like to read more about the creation story, or learn about what happened next for God and his people, check out the book of Genesis. It’s the first book in your Bible’s Old Testament.

Do you ever wonder where everything came from? The Bible says that God created the world.

Liz loves roller coasters.The loops, the turns, the tunnels! What causes the chaos this time?

Chamy is very excited to go to science camp and she is chosen to work with a very important scientist.. But disaster threatens when her friends visit and Spike interferes with the professor's research.

A mysterious professor is building a dome that he claims may save the world. When Liz enters the dome, what will he find?

Spike and Cole find a strange box inside the mysterious dome. When they open the box, sirens immediately go off. What have they released into the dome?

A virus has infected Cole. The only way to save his life is with a blood transfusion, but will it work?

It’s up to Liz and Spike to save Cole, the professor, and the dome before it's too late!

In the Beginning: Part 1

As the school science fair is gearing up, Chamy’s project asks some big questions about the universe that Lucille, Liz and Julia want to answer by proclaiming that God is the God of all things! Spike finds the gang some expert help from a surprising source.

In the Beginning: Part 2

For Chamy, Spike and the gang, the science fair day will be a day full of wonder! But, with a surprise guest, enlightening displays, and a big surprise pop for everyone, the day is not what they expected. And the biggest surprise comes for Chamy at the end of the episode!

Liz is fishing for the truth about a monster in the lake.