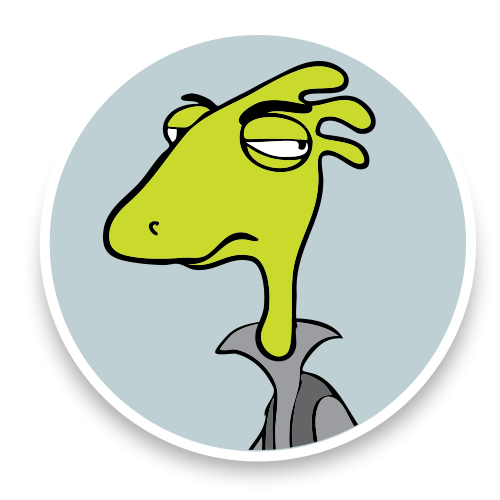 I’m Skink, and I’m about to talk, which means you’re about to listen.

Everyone always says I’m nothing but trouble, but they don’t know the truth. I’m an innocent, kind, and fun loving lizard who always appreciates all of my fellow lizards around me. Especially Liz!

Okay,Fine, Mumbly Pete! Here’s the truth. There are so many losers in this town I can barely stand it. That’s why I’m in Terrene – because if I weren’t, it would be probably crumble!

Liz, Spike, Morrie, even that Cowboy Cole – They all wish they were me and that’s the truth.  And don’t get me started on little miss goody two shoes Lucille – She thinks she’s the smartest lizard walking!

I’m out of here – Who told me I had to record this thing anyway?

Here are all the episodes that Skink is featured in.

Liz and Spike are at war with Teddy when he ruins their entry in the school Science Exposition. How will it stop—with more revenge? Or with forgiveness?

Skink the bully mocks a new kid's appearance. See how Liz and gang stand together to frustrate Skink's plans.

Liz and his friends are very excited about competing in the Beat the Buzzer game … so excited that they don't complete their assignment for church school, figuring out the difference between grace, mercy, and justice.

Grandpa challenges Liz and Lucille to be a peacemakers. Who's got the bigger test? Liz with Spike and Skink? Or Lucille with Mrs. Trollscales!

When Liz's cousin Herbert comes back home for a visit, he and Lucille are challenged to be better witnesses to their friends. But why is it easier to witness to a stranger than to their friends?

The school computers have been stolen, and Liz is on the case … but unfortunately so is Skink. Can they work together to find the thieves and return the computers?

To make big cash, Liz wants to borrow money. Is this scheme guaranteed to work?

For the Love of Liz

Liz really wants to be elected to student council, and he’s got a secret weapon to win. Will his plan work?

What does murder mean? Liz is sure that he’s never murdered anyone, but he needs some help figuring out the sixth commandment on this episode of Kids Corner.

Does God really expect us to love our enemies? What happens when Miss Wattle gives Liz the task of warning Skink to improve his grades?

Liz is having a very bad, horrible week when he loses Grandpa’s antique coin, fails a surprise test, and gets a cold.

Liz gets away with everything! That's what his sister Linda thinks. And what do a coin and missing chick have to do with precious Liz?

Linda hates that Liz is the special child who always gets what he wants. Grandpa and Granny teach some lessons from Luke 15 to help change her mind.

Liz and Lucille try to be friends with Gerard the new kid in town. But Gerard seems to prefers the Iguana gang! Can Liz help Gerard before his new friends get him into trouble?

Who should Liz choose: a Good Samaritan or the exciting Iguanas? Liz learns lesson in friendship and bike safety.

Skink and Cole are going to fight! What’s this all about anyway? And why is Liz so happy about it?

A new school means new friends, new teachers, and a new challenge—figuring out how they can serve God in this new place.

Liz becomes a slick salesman hyping up a cure-all tonic. Will the buyer beware?

Liz has found a racing car in Grandpa's barn. Can he convince Grandpa to let him drive it?

Liz doesn't sleep for days because he is preparing for the big spelling bee.

All of Terrene is clicking away and making duck faces, trying to capture the best selfie! Liz is confident that he’ll win the contest, until a long-forgotten figure from his past returns! Say cheese!

Liz’s game-winning baseball is missing, and Liz knows just who took it. Or does he? Find out on this week’s Kids Corner

How do people deal with loss? The kids are saddened when a death occurs in the Terrene community. At the same time, Lucille has to say goodbye to a favorite aunt who is going to do far away missions. How do you say goodbye?

Spike has reached his limit with Skink and his bullying. How will he get back at Skink and what does it have to do with the ninth commandment?

The Scales of a Cheat

School is upside down with both Liz and Skink both getting A's. And why is Granny refusing to attend her high school reunion?

Look out! Liz disobeys his dad, and then he and Spike are all tangled up with robbers.

Liz's class joins with another class, and soon Liz learns a lesson about celebrating abilities.

What’s the big deal about little sins? Why is Liz’s dad so upset when Liz didn’t do anything really bad?

Liz is a contestant on a TV game show, and he’s positive he will win!

When Miss Manners comes to town for a reality show about manners the kids all try to win the contest. But the winner is a surprise for everyone.

Lucille is acting very weird, and Liz is on this case to figure out why. Who is jumping to the wrong conclusion?